vangile gantsho is a poet, healer and co-founder of impepho press. Unapologetically black woman, she has partecipated in literary events and festivals both in Africa and abroad. She is the author of two poetry collections: Undressing in front of the window (2015) and red cotton (2018). She holds an MA from the University currently known as Rhodes (2016) and was named one of Mail&Guardian’s Top Young 200 South Africans of 2018.

Her latest collection, red cotton, is an exploration of what it means to be black, queer, and woman in modern-day South Africa, and it was named City Press Top Poetry Read of 2018, and long-listed for the National Institute for the Humanities and Social Sciences 2020 Award.

In this interview to AfroWomenPoetry she talked about her poetics, black feminism, South Africa and much more.

When and how did you discover poetry? Or was it poetry that found you?

Definitely the latter. Poetry found me young and searching, and has stayed with me since. I’ve been writing since my father told me to put all the stories I kept making up into a book. Those stories eventually became poems, and I began collecting my poems in high school (although I’ll be the first to admit how terrible they were). As time went by I read more, listened more, wrote more. And am thankfully much more grown now.

What was the context you grew up in?

We moved around a lot as a child. Mostly, I am told, because of my father’s political activism. Mama was (is) a nurse and I have two brothers. I am a middle child. I began school at the age of four. Repeated grade 1 when I went from a Xhosa-medium school to an English-medium school, and so began the work of losing my mother tongue.

The moving around taught me that books last longer than friends and so I began reading. Telling stories was actually born out of necessity. My younger brother, four years younger, needed bed time stories. And I was bored by the ones in the books we had, so I made some up.

I grew up in a family that shielded me from many of the countries cruelties and we had our challenges. I hold my memories dear.

Which elements informed your writing as you were growing up? Did the socio-political situation in South Africa shape your perspective on things?

I mean, I don’t know any writer who isn’t affected by their socio-political situation. Especially one who is an artist.

How would you describe your poetics? What are the themes and stylistic features that characterize your poems?

I love a vast range of poetry. Lyrical, narrative, multiple forms… I really love poetry. Personally, I am interested in writing the personal as political. In confessional writing. I want to write poetry that shifts something. That touches the pulse of something and affects it.

I like short sentences. I’m currently enjoying prose poetry. I’m constantly preoccupied with line breaks, white spaces, caesuras. I write a lot in the first person (mostly because I love confessional writing, and I think this p.o.v gives the reader personal access to the emotion of the poetry… like being invited into a secret.) I also try to write poetry that doesn’t beg the reader to agree or disagree. That can pretend to present the beautiful and the grotesque with the same indifference. That allows observation to guide, without begging.

You could say I’m trying to become less needy through poetry.

You co-founded impepho press. What is its aim? Is there a gap in the world of publishing that impepho press is filling?

impepho press is a Pan Africanist, intersectional-feminist publishing house that celebrates both the fragility and resilience of human experience. We are trying to archive brave, particularly feminist, voices that in the words of Audre Lorde, refuse to be “crumpled into other people’s fantasies of us and eaten alive”.

This includes the stories of (black) womxn who vacillate between Proverbs 31 and raging whore. Womxn who are complex and belong fiercely to themselves. Womxn who don’t claim to be put together or healed or even in the right. Womxn who interest us.

We want to be a part of archiving these voices. Making sure that history will know we existed.

You often recite your own poems at poetry events. How do you consider the connection between poetry and orality?

I come from a people of poetry. Imbongi ayinqandwa (the poet is not silenced). Poets are considered divined. It is the poet who can reprimand kings and inspire people. The poet speaks to the Creator. Is a messenger of the ancestors. And whether these messages flood onto papers or from the tongue at an event, it all begins with words.

According to your bio, “you are a healer and you create/support spaces that encourage (black feminine) healing”. What does it mean to be a healer and specifically to heal other women? And is poetry a form of healing?

Yes. Poetry is healing, for me. Poetry is how I came into my spiritual calling and found a language with which to speak to my ancestors. I am a trained spiritual healer, igqirha ngesiXhosa.

I think to be a healer is to be a listener. To open and create space for listening so we can understand where disharmony is. The “Strong Black Woman” trope is so prevalent, it has forced many women to live with their hands on the blade. To build and nurture and fight, while bleeding in silence. Black women are so strong, we are invisible. Not human. And always in service. I think the work we aim to do at impepho press, is to provide a space where (black) womxn don’t have to serve or survive. Where dancing is possible.

And I believe that to create true healing, we must return to harmony. Harmony requires us to restore the Divine Black Feminine (which does not necessarily refer to black womxn, but speaks of an ancient healing energy that has been silenced for many centuries and is rising now). We must welcome Her into Her full glory.

South Africa represents to many the most progressive country of the African continent. In spite of this, it sadly has the highest rate of rapes in the world. In this respect, how can you describe the condition and life of women in SA?

What is a progressive country? A Westernized country that emulates whiteness? That dangles whiteness as an unattainable carrot that we must always aspire to? South Africa has more Westernized (read Eurocentric) cities than most of Africa, it’s true. Complete with restaurants served by people who cannot afford to eat in them. South Africa also has over-populated rat-infested, poorly serviced (if serviced at all) ghettos, and completely forgotten rural areas. Our levels of inequality are unparalleled (in Africa). Add patriarchy and the pussing wound of Apartheid… you have a BMW parked outside a shack. An expensive meal paid for with an overdrawn credit card. A missing father who returns to a household that does not need him. Four old women huddled in a single room because they are afraid that if they sleep alone in their own house, the boy whose mother couldn’t look after him in Cape Town and is now bored ezilalini will rape them in the middle of the night.

And this is not to make excuses. This is to say that violence begets violence. And (black) womxn are at the bottom of the food chain.

A world that cannot see the value of the Black Divine Feminine is a world that does not value healing. Or perhaps, is not willing to accept that it is sick.

Do you define yourself as a feminist? Is there a feminist movement in South Africa supporting the rights of women?

There are plenty of feminist movements, formalised and informal. Power womxn, student activists, corporate fighters, rural gogos… black womxn is this country are a brewing storm.

A few years back, we had The Total Shutdown. Womxn saying enough! The #RUReeferenceList,… 1in9, POWA, Soul City, Hlanganisa. Never mind the womxn who run shelters and unfunded feeding schemes from their homes. Womxn who picket outside courtrooms and show up with sjamboks outside a rapist’s house.

We cannot count on the government, but we know how to show up for ourselves shem. 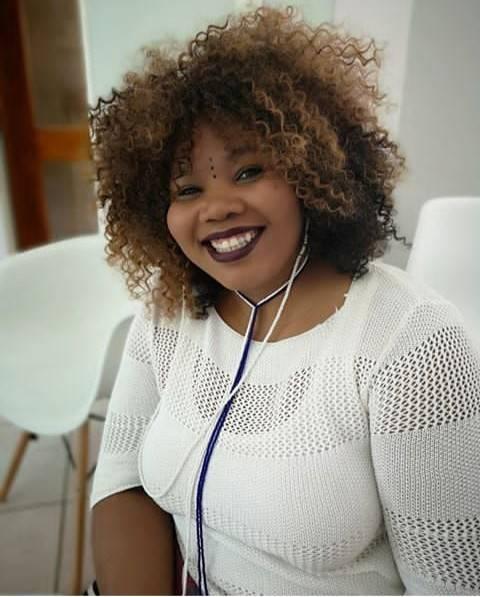 And, in a wider sense, is there a lgbtq+ movement supporting the right to gender diversity that also expresses itself through culture and art?

(and these are just a few organisations… off the top of my head.)

What role can poetry play in a world like ours, characterized at the same time by both extreme globalization and individualism?

I think, as Nina Simone so eloquently put it in her 1960 interview with Andy Stroud “An artist’s duty, as far as I’m concerned, is to reflect the times. I think that is true of painters, sculptors, poets, musicians. As far as I’m concerned, it’s their choice, but I CHOOSE to reflect the times and situations in which I find myself. That, to me, is my duty. And at this crucial time in our lives, when everything is so desperate, when everyday is a matter of survival, I don’t think you can help but be involved”.

But it’s not enough that we write pulse-shifting poetry. We need to strive to be good people. Healed people. So the earth-shaking poet who beats his partner, or sexually harasses womxn at festivals… none of that.

We ALL need to do better. As human beings. Heal. And let the art reflect that.

Italian poet Giuseppe Ungaretti, from the first half of the XX century, said that poetry is such when it carries a secret in itself. What is the secret inside your poetry?

I’m not sure I know. I am trying to heal. And to do the work I have been put here to do. Poetry is one of the ways I do this.

Can you share with us what are your projects for the future?

We have an exciting 2021 planned as impepho press. New books. More archiving. Playing with the different ways in which we can archive.

I am also enjoying curating and actively creating spaces for (black) womxn so planning on doing more of that. Spiritual work. Mothering. Saying yes to the opportunities life throws in my direction. That’s my plan.

Link to the Italian translation